Its been quite a while since I updated my blog. This is a long overdue post actually, since it was months ago since we took this trip. This trip was actually a last minute find because we decided to cancel our supposed trip to Donsol during the EDSA revolution holiday weekend due to bad weather conditions down there. It was my friend Ivy who was able to find this nice road trip route in the whereabouts of Laguna and Quezon which turned out to be an enjoyable weekend. And so, we left Manila at 3 in the afternoon about the new Hyundai Grand Starex, a loaner unit I borrowed from Hyundai for a vehicle review article for our website Autoindustriya.com. 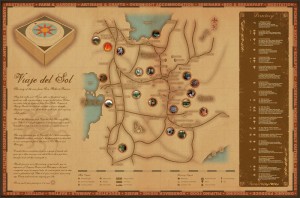 With no definite plans and no reservations whatsoever we braved through the South Luzon Expressway traffic jam as we tried to make calls along the way as we also decided the itinerary of our last minute trip. Luckily, one of the destinations (Kinabuhayan Cafe) was co-owned by a colleague Winston Baltazar and I quickly called for a table reservation for dinner. On the road, we also tried to book a place and luckily got the last available room (since it was a long holiday weekend, almost all places were fully booked) at Casa San Pablo to stay for the night.

We took the route going there through Tiaong, Quezon, a familiar route since it was a similar route going to the Batangas Racing Circuit, a place which I frequent during racing season. We first decided to stop by Kusina Salud to make sure our lunch reservation was confirmed since the place is said to get packed on Sunday lunch. Then came our adventure as we headed to Kinabuhyan Cafe, which was a like a complex puzzle to figure out. It took us almost half an hour just to find the place which at first looked like a cantina that popped out of nowhere in a residential neighborhood. Little did we know that it would be one of the best finds of our trip.

At Kinabuhayan Cafe, we were greeted by Ralph who led us to the waiting area as we waited forever for dinner. Jay Herrera, the chef and owner later came an introduced himself and gave the most uncomfortable words for hungry travellers, “I’m still experimenting with your dinner.” After about two hours of waiting, we were finally informed that dinner was ready. Woohoo! We’d eat anything by that time. Little did we know that it was one of the best dinners we’d ever tasted (it wasn’t because we were starving).

After dinner, which consisted of risotto, micro green salad from the garden, duck cooked hawaiian “hongma” style and a dessert made from sweet potato finished off with Barako coffee with pandan. Jay and Ralph came over our table to share stories with us. We chatted for a couple of hours until we decided to call it a night and check in at Casa San Pablo where we got our good night’s sleep for a long well-planned next day.